The French Navy (La Marine) owned the Infantry and Artillery of the Marine and the Senegalese Tirailleurs prior to 1900. These figures represent those troops in their blue and white uniforms with (in the case of the French) sun helmets.

Also included here are the Foreign Legion troops that volunteered for duty overseas (i.e., outside of North Africa) in places like Tonkin, Madagascar and Dahomey. These wore the Colonial sun helmet and were issued uniforms from Marine stores.

More French sailors can be found in the Sailors section. 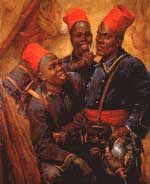 This is an impressive model of the famous French 75mm gun....